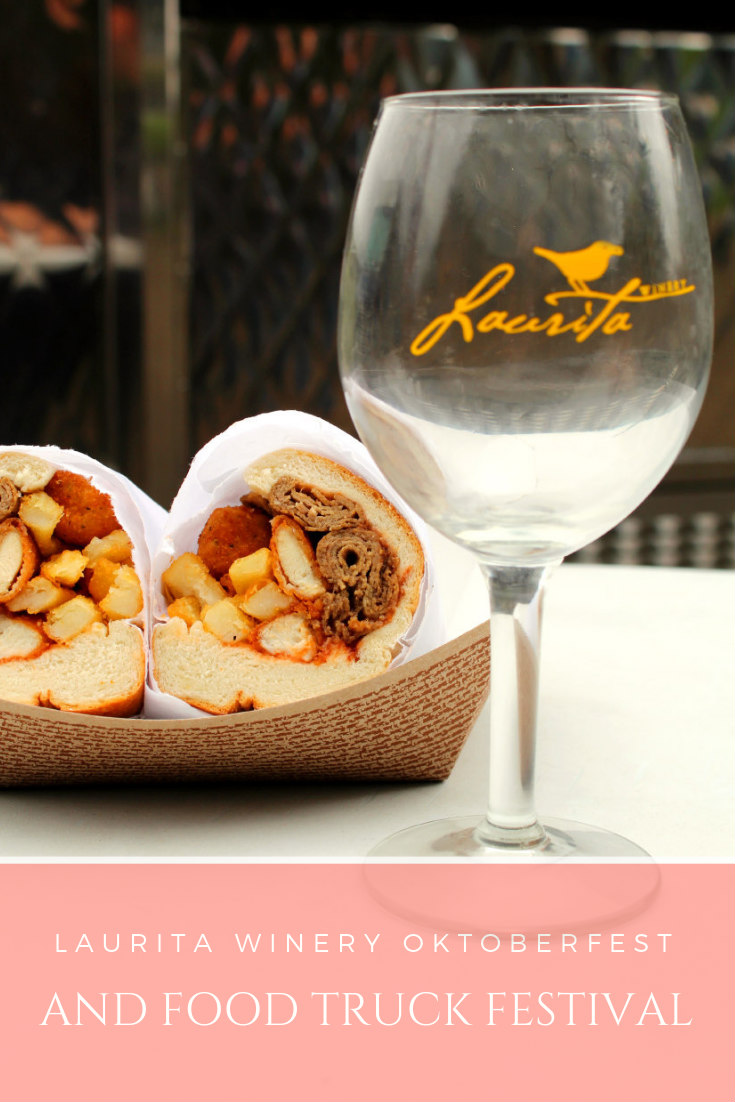 If there’s one thing that bonds our family together, it’s food. And wine. So we put those two things together and attended Laurita Winery Oktoberfest – a delicious food truck and wine festival – this past weekend.  The plans were made by one of my sisters.  She purchased a Groupon for 10 to attend this event at the local New Jersey winery.

I’m familiar with a couple local Jersey-made wines, but I wasn’t familiar with this winery.  I learned that the land the winery is located on has a rich history.  Made from two barns merged together with irrigation powered by solar energy, it’s an eco-friendly vineyard that produces a variety of different wines from dry whites, dry reds, sweet wines, and a chocolate dessert wine that has completely changed my opinion on chocolate wine! 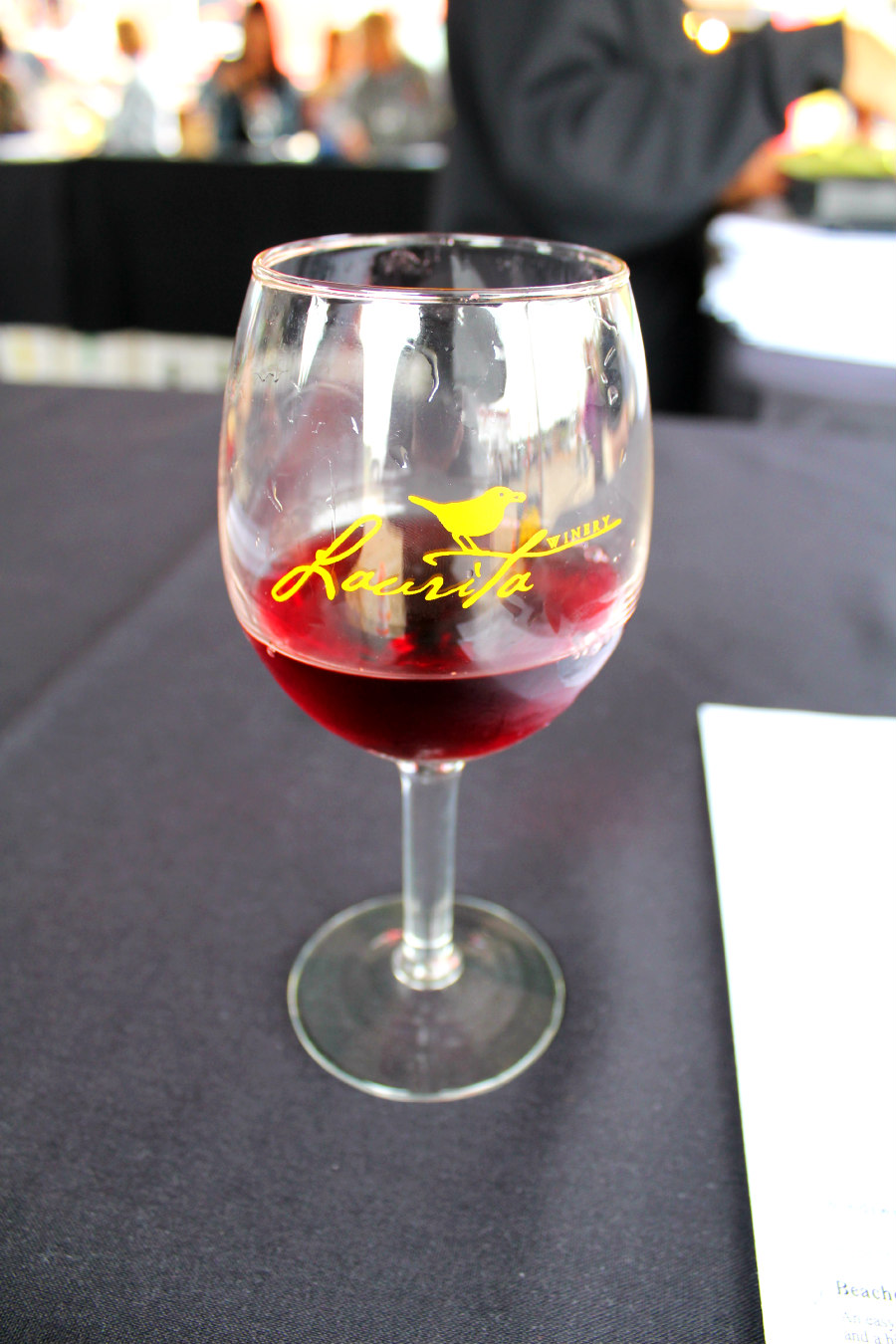 Since none of us had ever visited this winery before, our first top was the tasting tent. For $7, you got to sample 6 wines of your choosing. I sampled their Chardonnay Naked, Chardonnay Reserve, Bistro, Merlot, Cabernet Sauvignon, and Sangria. I preferred the Chardonnay Naked to the Reserve. It was a lot smoother with a clean finish.

Their Bistro wine was my favorite of the dry reds I tried. Its mix of black cherry, raspberry, and currants almost had an aroma of cranberry, with a flavor that was more tart than sweet. If I had a signature wine for Thanksgiving, this might be it!

My first choice for sweet wine was the Beachcomber Blush, a rosé.  After being swayed to try their famous Sangria, I couldn’t help myself, and I’m so glad I made the switch!  The Sangria is made with their Tailgate Red wine and a blend of seven different fruits.  This stuff is dangerous and tastes like it came from an adult juice box! 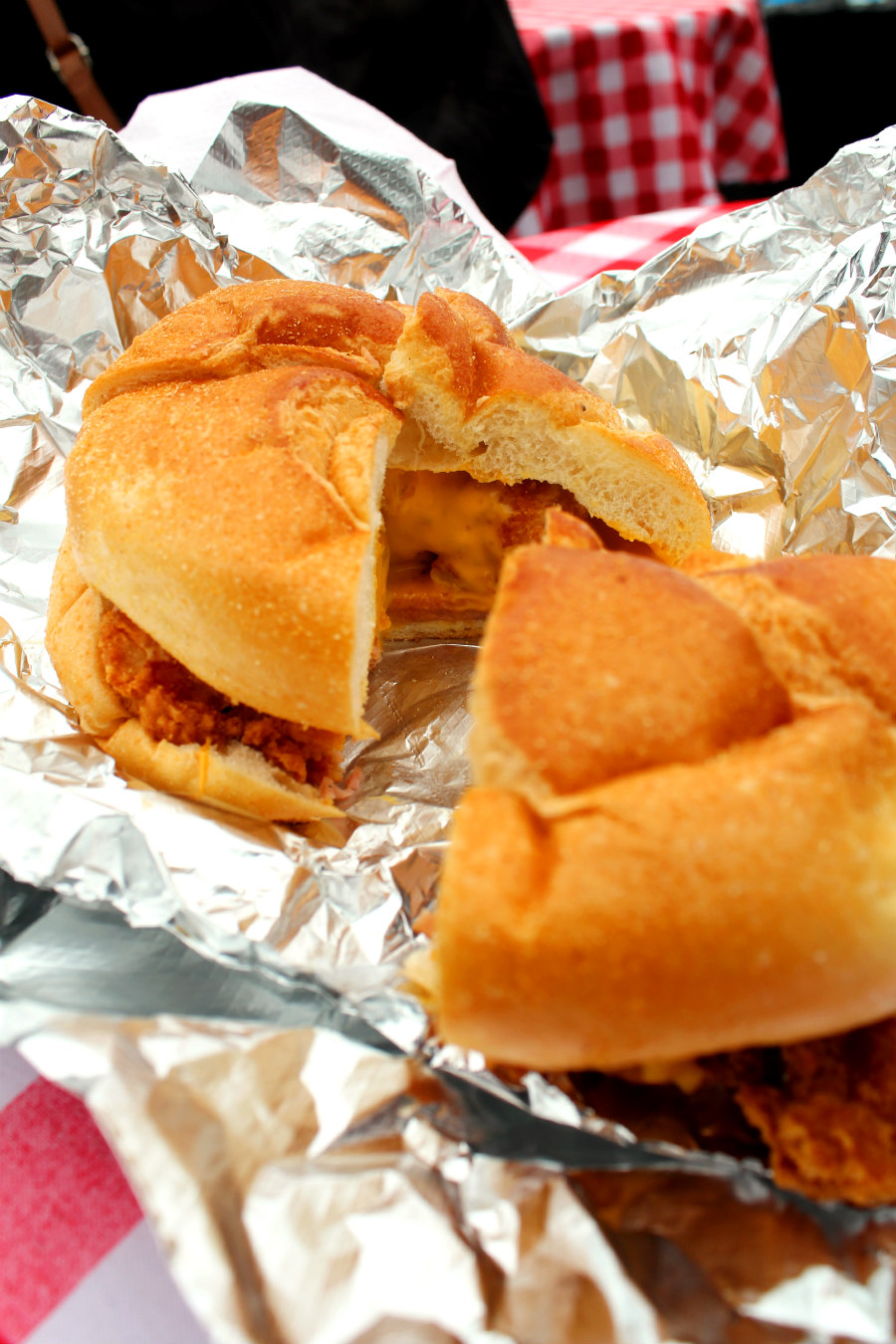 I’m not going to lie to you. I ate a lot of food, but for the sake of this blog post, I’ll call it “research.”  The key to enjoying this food truck fest to its fullest came down to two things: splitting almost everything I ate with multiple people and wearing leggings.  I came prepared!

My sister and her fiancé wanted something from Jersey Roll.  If you haven’t guessed, they’re all about the pork roll!  After all, it’s a Jersey staple!  We split the Pork Roll Chicken Cordon Bleu.  It’s a pork roll and cheese sandwich made with chicken tenders.  The pork roll took the place of ham, the chicken was crispy and, if you’re a fan of cheese, there’s a generous helping of it!  Delicious! 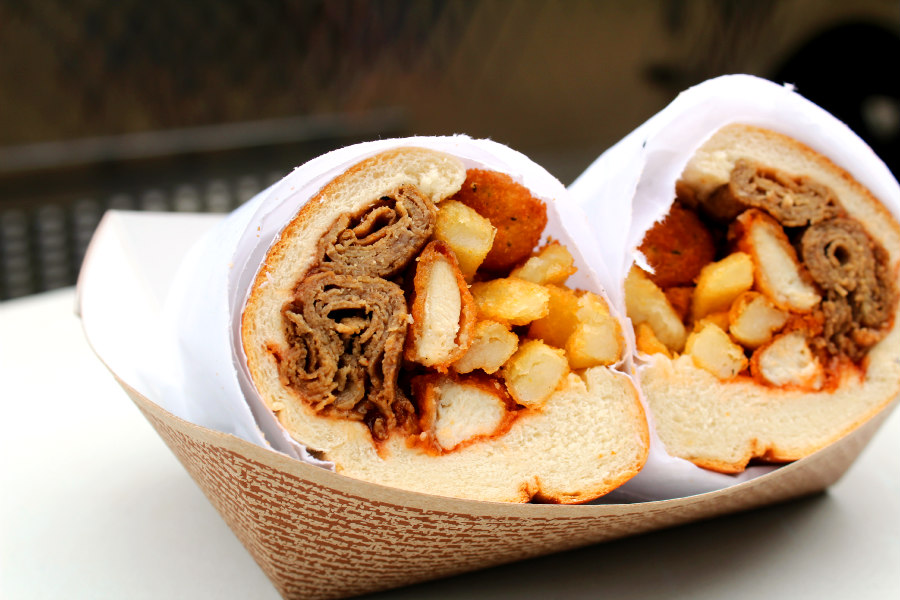 My sister, Nicole, and I eyed up the Brie sliders from Five Sisters Catering as soon as we saw them on the menu!  We split them with our mom and sister-in-law.  The sliders are made with burger patties, caramelized apricot onion bacon jam, and melted brie.  My sister and I both agreed that we didn’t get much apricot or bacon flavor, but the onions were sweet and the burger topped with brie was a delicious combo!

My sisters’ fiancés split a Philly Fat Sandwich, reminiscent of the sandwiches I’d watch people eat at the Rutgers grease trucks back in the day.  The sandwich is made with cheesesteak, chicken fingers, mozzarella sticks, and fries.  They said it was a little dry, but my brother did it right later on in the day, adding marinara sauce! 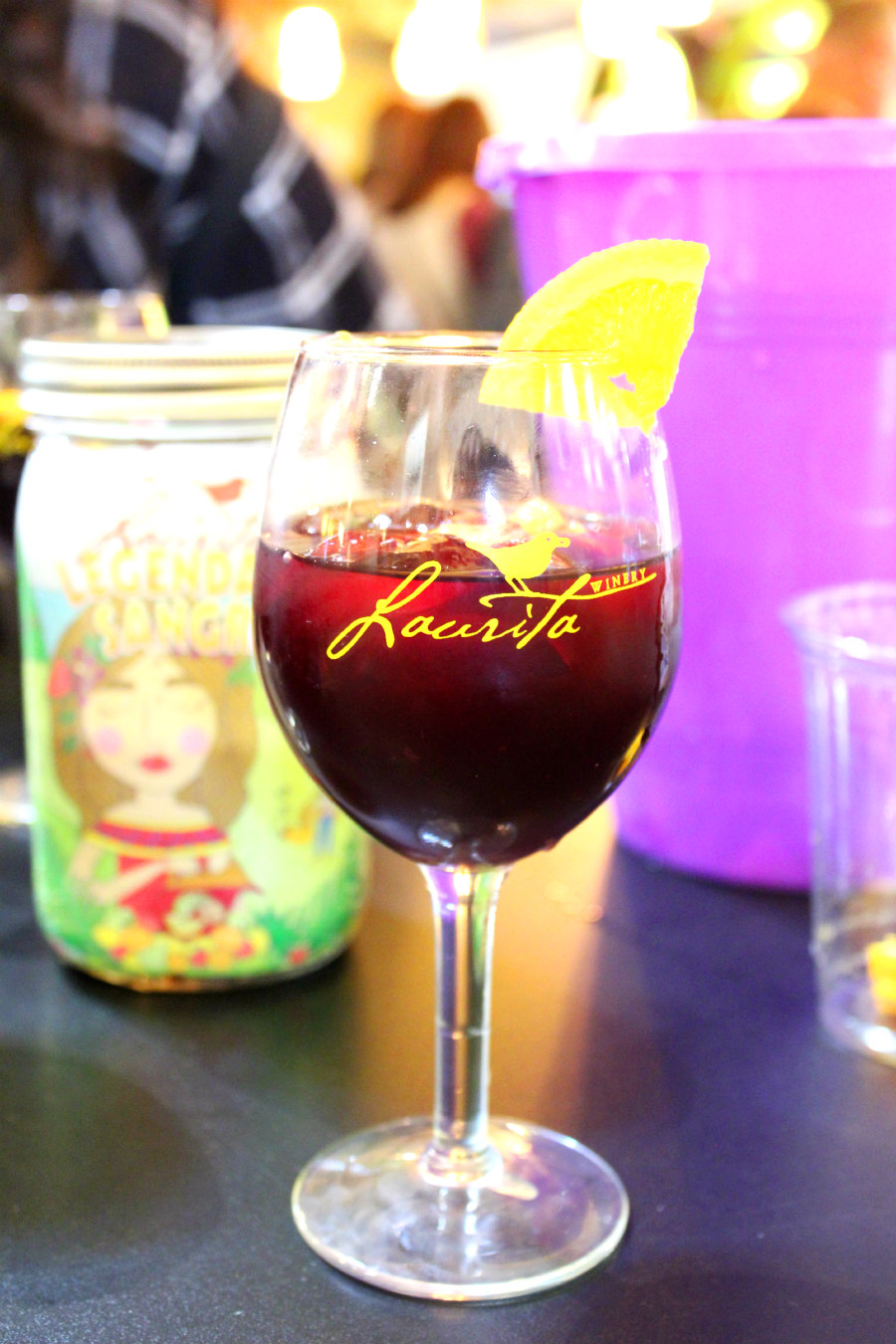 With so much eating going on, we needed something to wash it all down with something.  So my sister, her fiancé, and I headed inside to split a mason jar full of Sangria (YEAH, WE DID!).  It came with a bucket of ice and a cup of orange slices.  Again, I will sing all the praises for this sweet blend of red wine and fruit!  We sat, we talked, we drank, and when we were finished, we went back for more food! 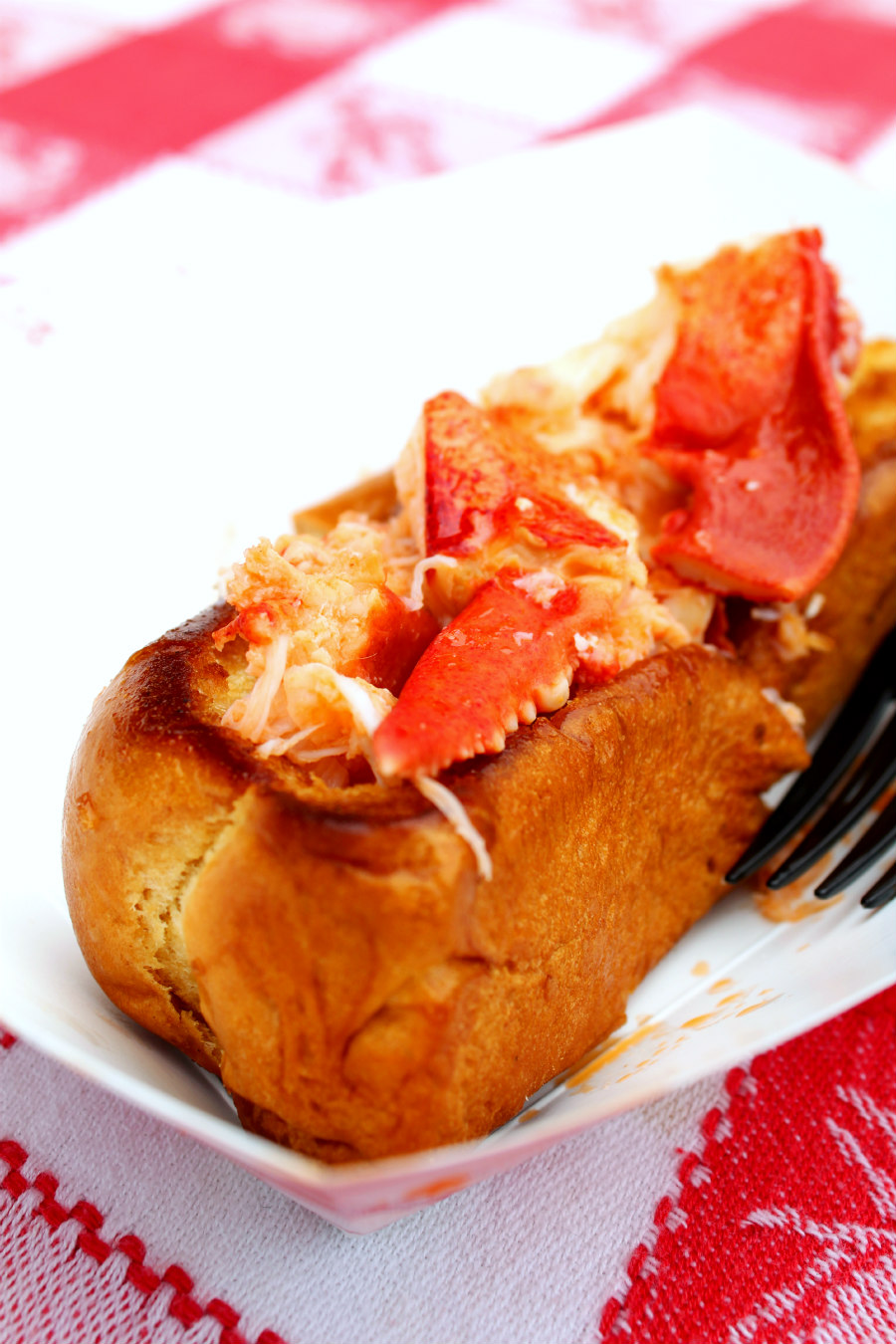 SCUBA AND THE BEAST RESTAURANT

Mom and I stopped at Scuba and the Beast to split a hot lobster roll.  Our lobster roll was made mostly of claw meat, but was sweet and had just the right amount of garlic butter, served in a warm and toasty roll.  My final word on this: I will never deny myself lobster!

I had a solo mission at Dan’s Waffles to try the Bourbon Maple Bacon sundae.  Ultimately, I am grateful for my siblings who helped me eat this!  The sundae is made with chocolate fudge, vanilla ice cream, maple bacon jam, candied bacon, and a Maker’s Mark Bourbon whipped cream served on top of a waffle.

To be honest, I found myself eating a dessert I never thought I’d be interested in and it turned out to be one of my favorite selections of the day.  Sure, I could have eaten that bourbon whipped cream on a plate by itself, but all of that salty bacon goodness worked so well with the fudge, the maple, and the ice cream!

The final stop was the Pompier Food Truck for some pierogies.  We had classic pierogies stuffed with potato and cheese, fried until golden brown outside, and served with fried onions, chives, and sour cream.  Just the way I like them!  They came with a side of yellow rice that was fluffy and flavorful.

A GREAT DAY OF FOOD, WINE, AND FAMILY!

This Oktoberfest provided fire pits for patrons, live music, and had fireworks later in the evening (we left well before then). The wine was flowing and I think I’m still stuffed from all of the food I ate. While I’m not usually a big fan of “outside” food, I can honestly say, I am now a big fan of food truck festivals!

Oktoberfest was geared towards adults, but the kids also enjoyed the food, the fire pits, and the small play area.  The adults enjoyed trying new varieties of wine and a ton of food!  It was a nice afternoon out with the family and I look forward to visiting this winery in the future!

How to Naturally Combat Fleas with Essential Oils