The traditional flavors of sausage and peppers get wrapped up in refrigerated biscuit dough to make these easy Sausage & Pepper Stuffed Rolls!

My father used to have a guys night every so often with some of the guys from his bowling league.  It was during one of those dinners that I was introduced to my husband.  I so wasn’t interested at first!  But eventually I gave him a shot (after being reintroduced to him) and those guys nights became opportunities to see each other.  Instead of hanging out with the guys, he would come hang out with me!  Of course, not before we would enjoy some of my dad’s homemade pizza and mussels and whatever one of the guys may have brought over that night.

So today’s recipe is inspired by one of those dinners.  One of the guys used to bring over these delicious, homemade sausage rolls.  They were made with spicy sausage, strips of pepper, and tomato sauce, all wrapped inside dough and baked until golden brown. 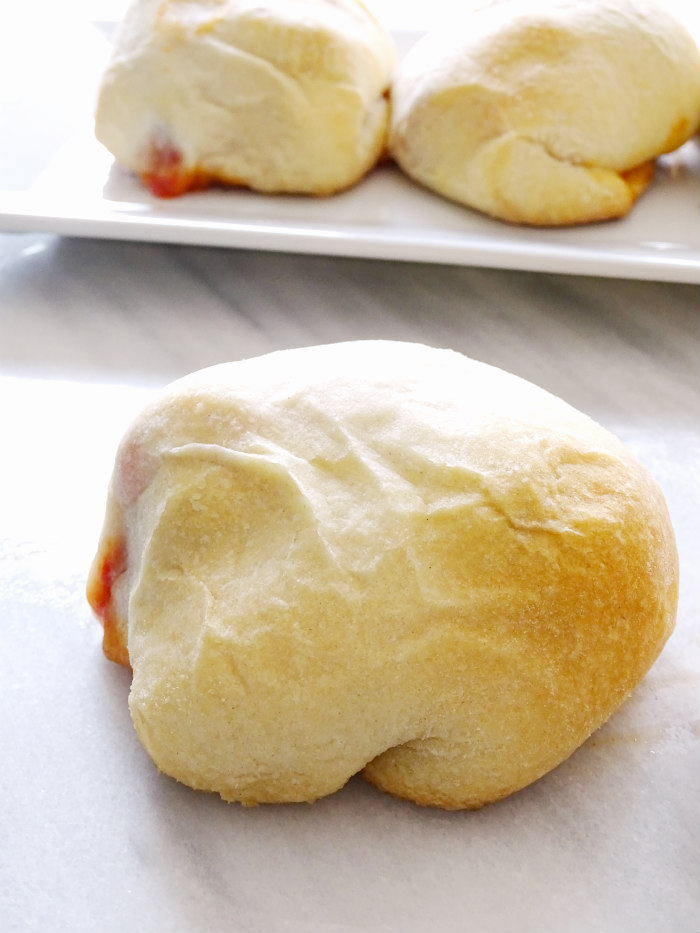 I recently made my own version of those sausage rolls to have with dinner one night last week.  Instead of using pizza dough, I saved myself the trouble and used a tube of refrigerated biscuits.  I had peppers and onions already cooked in a tomato sauce from a previous dinner and a few links of sausage in the freezer.  So it totally made sense to make these rolls!

Using refrigerated biscuits makes it so easy to assemble these rolls!  Each biscuit gets rolled out on a floured surface to form a flat disk.  Then, I spooned a little of the sauce in the center of the disk, making sure I had at least one strip of pepper inside, and added a couple bite-sized pieces of sausages on top.  I folded each side of the biscuit dough over the sauce-filled center and placed each roll seam-down on a baking sheet.  My final touch before baking was brushing a little olive oil on top.

The inside of these rolls will be piping hot, so let them rest for a little bit before serving.  Your mouth will thank you for it!  Especially since you’ll want to dive right in for seconds!  And if you just so happen to have leftovers, just pop these rolls in the freezer and reheat them in the oven.  They’re a perfect make-ahead dinner roll for a weeknight dinner or a weekend gathering!

What's for dinner tonight? We had London broil wi

If your mom just happens to love Schitt's Creek an

⭐️ Happy Star Wars Day from Hunter and his bud

Mother's Day is almost here! How are you treating

A rainy start, but it turned out to be a nice Sund

I remember when I first made this Lemon Feta Chick