Warm up on a cold night with this cozy Caramel Apple Hot Toddy! It’s a twist on a classic Hot Toddy made with spiced apple cider and Sugar Free Torani Caramel Classic Syrup!

This post has been sponsored by Torani Syrups. All opinions are mine alone. #aguiltfreeholiday #torani

Unpopular opinion – wintertime is the best time!  While the majority of people I know complain about the winter, I embrace it.  There are things I love about the spring and summer, but I get so excited for the fall and winter!  From the end of October through the first week of January, there’s a complete sense of joyfulness in the air.  Every snowfall is magical and every freezing, cold night is an excuse to move a little closer together and snuggle!

This time of year is so full of excitement!  But preparing for the holidays can be stressful.  There are deadlines to meet, presents to wrap, cookies to bake, and relatives to visit.  That’s why I enjoy when everything gets a little quieter at night. It’s the time of day when I can decompress, hang out with my husband, admire the glow of our Christmas tree, and sip something warm and comforting.

A Hot Toddy with a caramel apple twist!

Last winter, I made myself a Hot Toddy for the very first time.  This classic drink is a warm and cozy beverage to sip on a cold night.  It’s even said that a Hot Toddy can help a common cold!  So what goes into a Hot Toddy?  It’s simple!  You just need hot water, whiskey, honey, and lemon juice. 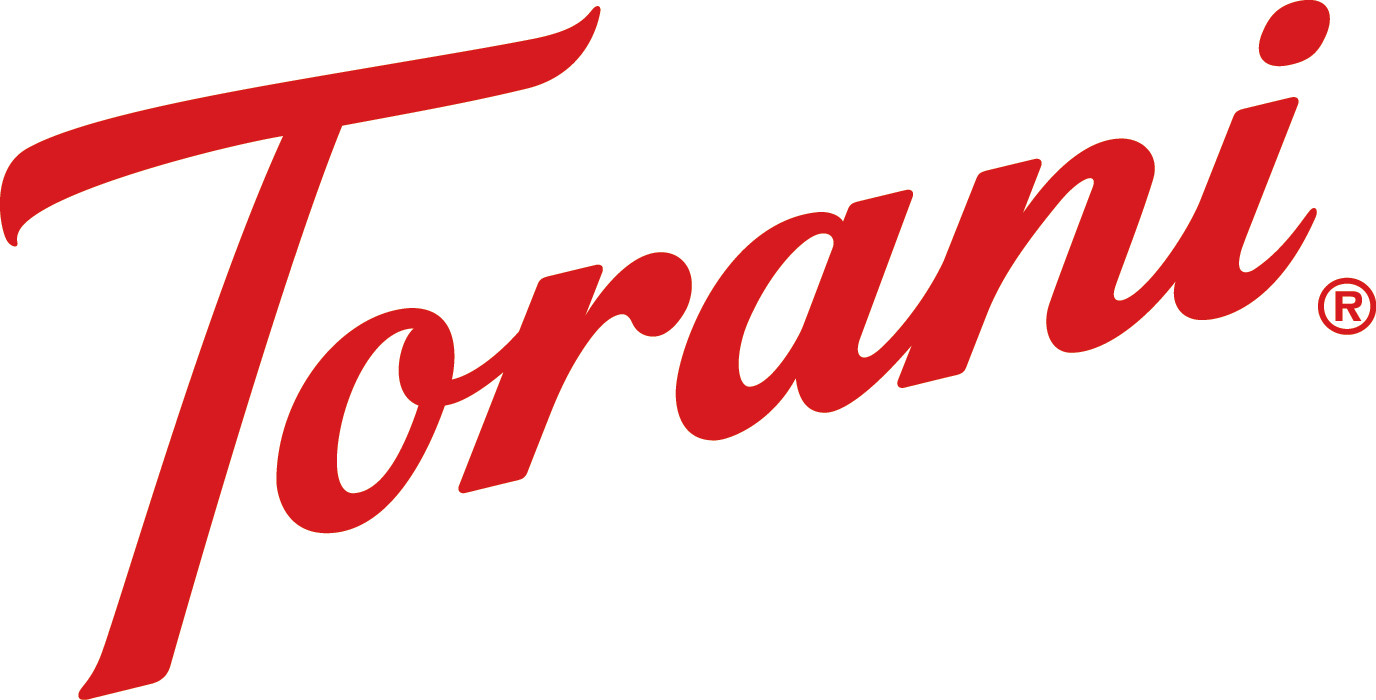 Torani syrups are made with simple and thoughtfully sourced ingredients.  I used the Sugar Free Torani Caramel Classic Syrup to keep this drink as guilt-free as possible.  Not only that, this syrup gives this Hot Toddy just the right amount of sweet, caramel flavor!  It’s the perfect companion to holiday drinks, coffee, and hot cocoa!  The recipe possibilities are endless!
Print
Yum
Caramel Apple Hot Toddy

There’s honey flavored whiskey in this bad boy, but you can use your favorite whiskey in this Hot Toddy recipe. A cinnamon whiskey might be nice! It’s a sweet drink, but not too sweet.  And it tastes just like a caramel apple!  The Sugar Free Torani Caramel Classic Syrup is so good!  You definitely won’t miss the sugar!  Find it in the coffee and tea aisle at a Walmart near you!

Did you spend a cozy evening sipping this Caramel Apple Hot Toddy recipe? Share your pics using the hashtag #livinglavidaeats. Don’t forget to tag me @lavidaholoka!

Chill out this summer with a refreshing Skinny Whiskey Arnold Palmer. This mix of lemonade and iced tea is sweetened with stevia for a low-cal cocktail!

I’ve somehow ended up with an abundance of whiskey.  Party over here!  It’s not necessarily a bad problem to have, but whiskey isn’t my first drink of choice.  We have two bottles of flavored whiskey to use in chocolate pecan pie – my husband’s favorite that I make just for him because I’m not a fan.  On top of that, my parents ended up giving me three more full bottles of whiskey.

Since then (and it’s been a while), I’ve been trying to come up with different ways to use up my stash instead of just having it sit on a shelf.  There are only so many pies I can make for my boo.  Especially since those summer temps are rising and I’d rather not turn on the oven if I don’t have to.  So there’s the occasional pie and I’ve been using it in barbecue marinades to use when we grill, too.

Then, there’s the obvious solution – drink it!

So here we are in the second week of July and it’s been hot AF.  On one particularly steamy 90 degree day, I decided to put some of our whiskey to good use.  I initially wanted to make whiskey spiked lemonade.  As I pulled the ingredients to make a stevia simple syrup and mix up a lemonade base, I decided to go one better.

You know, that classic lemonade and tea drink named after a famous pro golfer.  It’s the best of summer beverages in a glass.  Especially when it’s spiked! 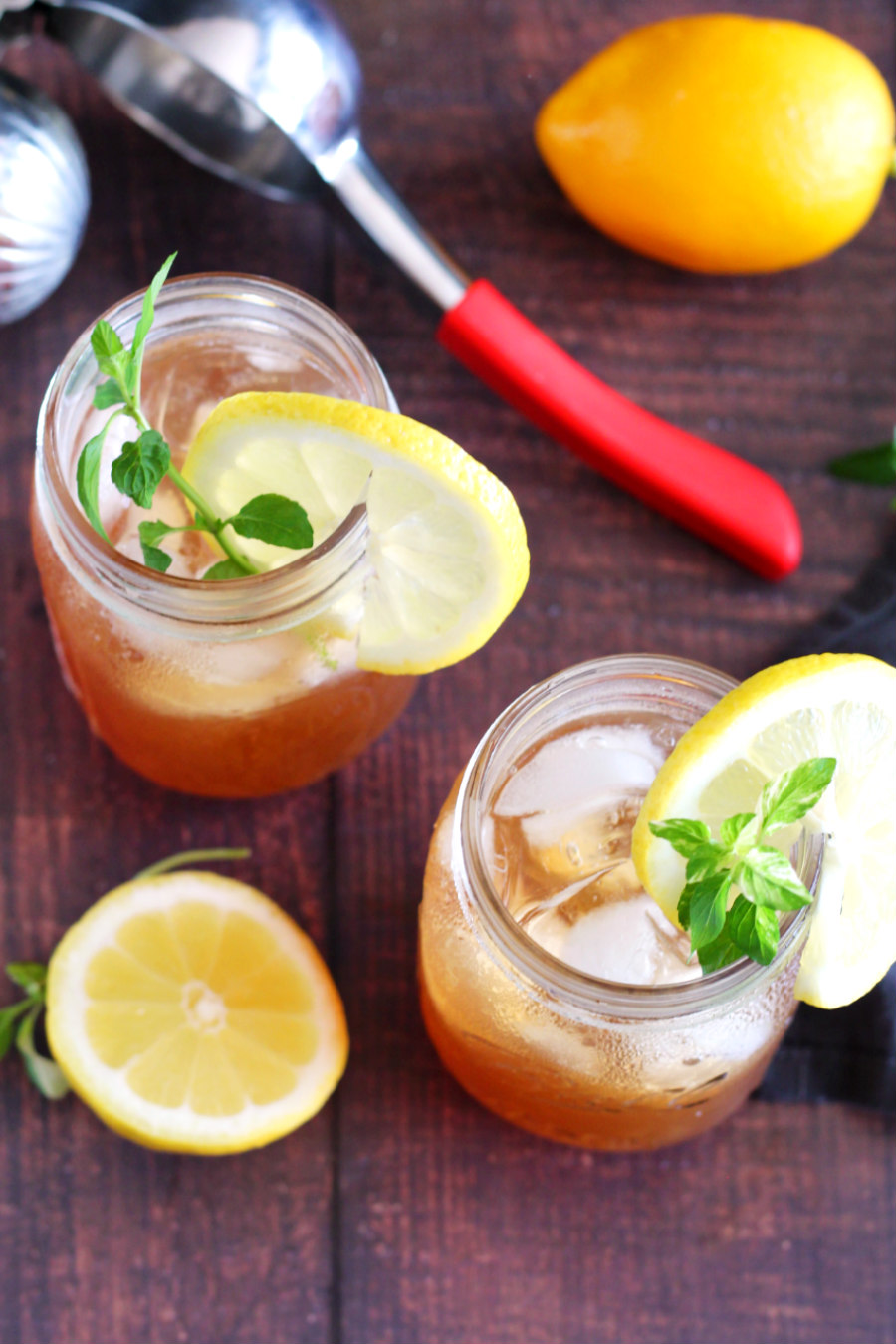 And since I’ve been doing a decent job of cutting out extra sugar lately, I made my simple syrup for this drink with stevia.  That way, when I’m trying to unwind and cool down at the end of a summer day, I won’t feel entirely guilty about guzzling a quart-size mason jar of this whiskey spiked Arnold Palmer.

Sure, you could totally use store bought lemonade and tea, pour some whiskey in, and call it a day.  But then, you have to factor in all of that added sugar.  It’s worth the extra steps.  Not just to cut the sugar, but because it’s doesn’t get any better than homemade lemonade and iced tea!

So I started with whiskey and lemon juice in my shaker (aka a quart mason jar).  Then, I made my simple syrup with stevia and water.  I let that come to a boil and took it off the heat.  Then, I filled the mason jar with ice and poured in the simple syrup.

After that, I boiled a little more water and steeped an iced tea bag.  I let that cool for a bit, added it to my mason jar, gave it a good shake, and poured it into pint jars.  Garnish with a slice of lemon, some fresh mint, and sip!

If you’re not much of a whiskey drinker – or drinker, in general – omit the booze and enjoy a refreshing summer beverage!  You could even go so far as to make the lemonade and tea mixture ahead of time.  Then, add the whiskey and garnishes before serving this seriously refreshing summer sip!

These Raspberry Beergaritas are made with raspberry beer and classic margarita ingredients.  It’s a fruity beer cocktail that combines two popular adult beverages into one delicious drink! It’s been a crazy winter! Winter was totally confused this year in New Jersey!  One day it would snow, then the next day it would warm up and make it look like the snow never happened.  It’s been pretty mild.  At first, I was really bummed that we hadn’t had one really big snow this year.  But the closer we get to the official start of spring, I can feel my Spring Fever starting to set in.

We’ve started preparing the garden again for growing spring and summer veggies, I’m itching to spend more time outdoors, and I can’t wait to incorporate lighter, seasonal dishes, and fruity spring cocktails back into our menu!  To celebrate the return of spring in just a few weeks, I whipped up a batch of fruity, Raspberry Beergaritas!

Can’t decide between a cold beer or icy margarita?  This is the drink for you!  This fruity beer cocktail combines raspberry flavored beer and margarita ingredients into one delicious cocktail!  Blend them up for your next springtime celebration or save the recipe for Cinco de Mayo!

Get the recipe today on SoFabFood.com and get ready to celebrate all things spring with this fruity beer cocktail!

Valentine’s Day gets me all sentimental and has me thinking about sweet moments in my relationship.  Actually, it has me thinking about sweet moments in some of my friends’ relationships, too.  Like, I never really had that immediate “he’s the one” spark with my husband.  It’s something that developed over time.  But I sure as hell knew that my friend’s then-boyfriend-now-husband was “the one” for her as soon as I met him!  Funny.  Isn’t it?

It’s the season of sweetness, red and pink, and hearts – lots and lots of hearts!  I’ll have one or two Valentine’s Day recipes coming up for you soon, but today I’m talking about cocktails!  Sweeten up your Valentine’s Day evening with one of these Valentine’s Day cocktail recipes!  I’ll more than likely be sipping on a glass of red wine with a special romantic dinner for two, prepared with lots of love, on Valentine’s night! But who knows?  Some of these cocktails look very tasty and easy to make, too!

Do you have a favorite cocktail to sip on Valentine’s Day?

Made a dairy-free version of that TikTok feta past

Happy March! It's a new month, a new week, and we

#AD Is there anything better than a freshly stocke

As a bigtime foodie, I never would have thought th

Happy Monday! It's a fresh new week with fresh ne

My sister bought me a terrarium for my birthday a

I wanted to get out in the sun. ☀️ He wanted t