This Warm Brussels Sprouts Caesar Salad is made with shaved Brussels sprouts, bacon, potatoes, sundried tomatoes, Caesar dressing, and Parmesan cheese. It has all the flavor of Caesar salad in a warm and cozy fall side dish! 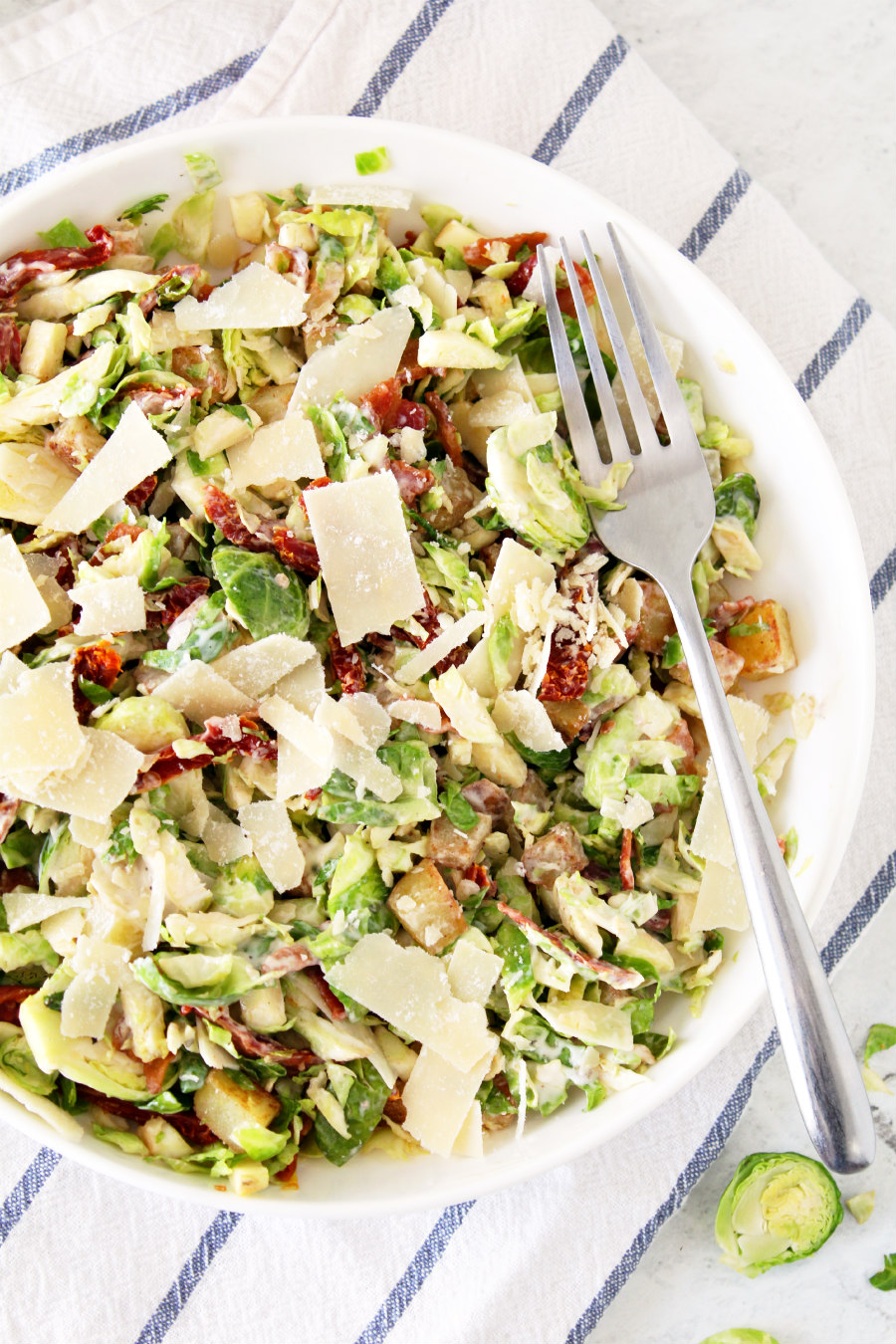 It’s funny how some of our favorite recipes come together when I’m not in the mood to cook at all.  A few weeks back, I was looking for something quick to make with dinner.  I had a bag of shaved Brussels sprouts, some leftover strips of bacon, and a bunch of yellow potatoes to use.  So I made a warm Brussels sprouts salad.

As I started adding more things to the skillet, our warm salad became a loaded Caesar style salad.  After dinner, my husband and I both commented on how good it was and split the leftovers for lunch the next day.  I told him, “It’s a good thing I wrote everything down because I’m totally making this again!”

Wanting to add this recipe to my website was a great excuse to make it again! The only thing I did differently this time around was add big flakes of shaved Parmesan cheese on top.  Everything else was prepared just as I did the first time around – in the skillet, then tossed with bottled Caesar dressing.

If you’re looking for a quick, weeknight dish that’s perfect for fall, this Warm Brussels Sprouts Caesar Salad is an impressive side dish that’s full of Caesar salad flavor.  Plus, the entire salad is made in just one skillet!

The first step in making this salad is cooking the bacon.  Chop it up and add it to a hot skillet.  Cook it just until it’s nice and crispy.  Then, remove it from the skillet and set aside.

Keep the skillet nice and hot.  Then, dice up the potatoes and add them to the pan.  Leave them undisturbed for a few minutes, then give them a stir.  Once the potatoes have softened, remove them from the pan.

Wipe out the pan and add just a touch of olive oil.  Add the potatoes back into the skillet and leave undisturbed, once again, until browned on the bottom.  Continue to cook until browned on all sides.

Just before serving, stir in slivered sundried tomatoes and season with salt and pepper.  Toss with Caesar salad dressing and serve with shaved Parmesan cheese on top.

This salad has those warm and cozy fall feels.  It’s the perfect dish to make when you want some that’s satisfying, but still light.  And if you’re thinking ahead, this would make a great Thanksgiving side!

Did you make this Warm Brussels Sprouts Caesar Salad recipe? Share it on social media using the hashtag #livinglavidaeats. Don’t forget to tag me @lavidaholoka!

Happy December! The tree is up, the decorations a

#ad I finished writing out my holiday baking list

I’ve become a ginormous fan of the @dollartree t

I can officially say that my husband bought me a d

We put our outdoor Christmas lights up yesterday!

#ad It is Small Business Saturday! It’s a great

#ad Who's sporting a Thanksgiving too much food ha

#ad One of my favorite parts of Thanksgiving is br

In anticipation of decorating the tree at the end

Do you remember the Scented Christmas Wax Sachets