This post may contain affiliate links.  Making a purchase through one of these links helps support my blog.

My husband can take a box of brownies and turn them into the most magical brownies you’ve ever tasted in your life (no, not like those brownies)!  They’ve got a perfect outer edge and a deliciously chewy inside!  And somehow, he manages to be consistent every single time!  So I’ve basically left brownie duty to the master.  That was until about a week ago when I finally learned some of his tricks!

I had a craving for brownies, but I wanted to make them festive for the holidays (and to get me in the mood to start my long list of holiday baking).  Thankfully, the brownie master just happened to be home from work the day I made these!

When I asked my husband how he makes his perfect brownies, he told me to bake them for the longest time on the box.  Basically, bake the brownies for the longest recommended time for the type of pan you’re using.

Say, you’re using a standard, non-stick brownie pan and the box of brownies says to bake them at 325º for 30-35 minutes.  Bake the brownies for the full 35 minutes and don’t open the door while they’re baking!  There’s definitely something to that!  Because after 35 minutes in the oven, the brownies had a perfect crust on the top and chewy bottoms!  It was hard not to eat any before decorating them!

But instead of using a regular brownie pan, I made these brownies in a mini muffin pan to create small, brownie bites.  I used the same time and temperature as a regular brownie pan.  Then, I turned them into reindeer with chocolate frosting, candy eyes and cinnamon drops to create the face and broken pretzels for antlers.  So stinkin’ cute!  And my husband said they were really good, too!

Moms, if your little ones want to get in on the baking action, these are an easy Christmas treat they can help you make!  Just frost the brownie bites with chocolate frosting.  Then, let the kids decorate them with the candy eyes and cinnamon drops.  They might need a little help pushing in the pretzel antlers, but they’ll love turning brownies into reindeer! 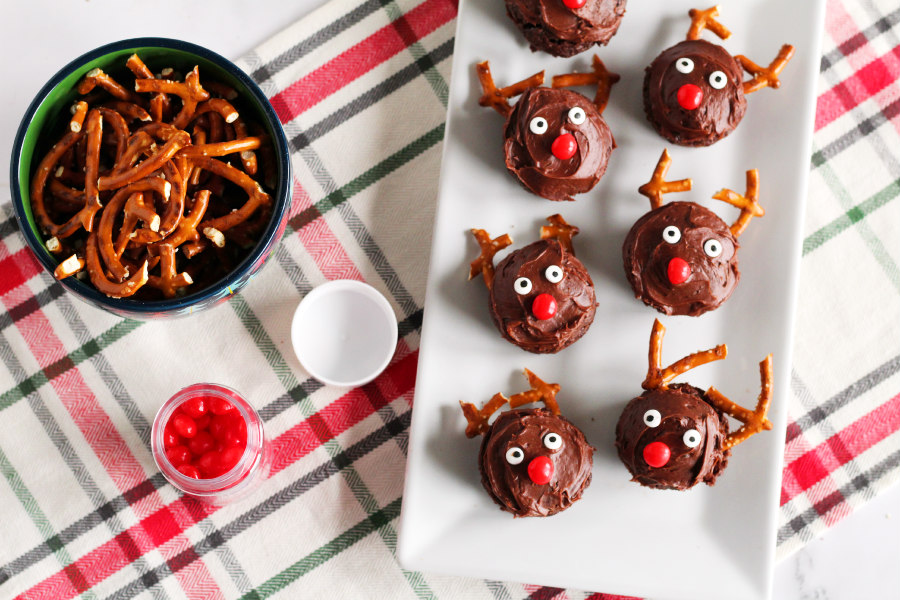 I’m really only a baker around the holidays.  The rest of the year….not so much.  That’s why I usually stick to box mixes and premade cookie dough.  But if you have a favorite homemade brownie mix recipe, I’m sure it would make these brownie bites taste even better than they already do!

These reindeer brownies would be adorable for a class party or make an easy treat to enjoy during a holiday movie marathon!  Add them to your holiday cookie trays or leave a couple out for Santa! Who could possibly resist an adorable red-nosed reindeer?  Especially when it’s made out of brownies!

Did you make these Mini Reindeer Brownie Bites? Share it on social media using the hashtag #livinglavidaeats. Don’t forget to tag me @lavidaholoka!  Merry Christmas!

5 Reasons Why I Love Crafting with My Explore Air 2